My home waters are on the CT side of Long Island Sound, in a sheltered cove a bit east of New Haven, between the Farm River and Killam’s Point.  I took this picture yesterday at the afternoon high tide, when I went down to swim with my daughter Olivia.  If you squint you can see on the left side the house where the American poet Ella Wheeler Wilcox lived in the 19c.

On a calm day, the swimming is great — warm & salty, with no waves to speak of usually.  The tide matters a lot to swimmers here.  At low tide, it’s too easy to dig down into the silt with each stroke, but with a good flood, in this sheltered cove, it’s easy to swim out a mile or so in calm open water — out to Gull Island to disturb the birds, or even toward Kelsey’s, at the river’s mouth.  Sometimes I  worry about boat traffic, but it’s mostly kayaks & sailboats (inc the Yale sailing team).

The Sound doesn’t circulate all that much, so the water isn’t as clear as it could be. You can’t usually see the bottom, which is often enough silt anyway.  I swim through a kind of sand- and salt-filled haze, with almost everything blurry even if I remembered my goggles (which I didn’t, yesterday).

This evening the surf will be up as Hurricane Earl passes offshore.

They began to go

To pieces at once under the waves’ hammer.

Sick at heart since that first stroke, they moved

Nevertheless as they had learned always to move

When it should come, not weighing hope against

The weight of the water, yet knowing that no breath

Would escape to betray what they underwent then.

Dazed, incredulous, that it had come,

That they could recognize it….

…And to some it seemed that the waves

Grew gentle, spared them, while they died of that knowledge.

The new semester’s here, so it’s time to put away the summer reading & turn to class prep.  In the past few months I’ve been reading postmodern (mostly 21c) novels that in various ways respond to The Tempest, & I thought I’d jot down some thoughts.

Thomas Pynchon, Mason & Dixon (1997): The utopian fantasia becomes a “Visto through the Wilderness,” as Englightenment rationality does for Pynchon what humanism did for Shakespeare, though Pynchon is more overtly skeptical.  But I wonder if the deep ambivalence that’s M&D wears on its sleeve isn’t the underlying anxiety that clouds Shakespeare’s play: the sense that, at the end, Prospero’s brave new world isn’t as “brave” (in the early modern sense of decked out, dressed up) so much as it is costly, both morally and economically.

Barry Unsworth, Sacred Hunger (1992): The two cousins both want to be the princely heir, and the great thing about this book is that the multiracial utopian section, in which the proto-Darwinist doctor enters into a matriarchal mixed marriage with a former slave, isn’t cloying or overdone.  Instead it’s a version of that old feminist plea about Caliban and Miranda forming an alliance, even if it doesn’t end up working out any better than it might in the play.

Marina Warner, Indigo (1992): What does Miranda want?  She, too, gets her Caliban (in the 20c frame tale), and Warner’s novel presents the various Prospero-ish men as the fuller opacity than the fertile Caribbean.   Great stuff about sports & sporting culture — perhaps an oblique way of thinking again about the theater, another profession that runs on sanguy or physical charisma?

David Mitchell, Cloud Atlas (2004): In the end more Melvillean than Shakeseparean (if that’s a distinction with a difference), Mitchell’s high-wire act of stylistic change mirrors, on the level of the phrase, the experience of radical cultural change that the novel describes (and that we’re all experiencing).  Perhaps a bit sentimental on the last page?  How can you reconcile the novel’s deep fear of corporate power structures with a humane plea for abolition?  Need to re-read Benito Cereno..

I have counted half the catalog of ships,

That caravan of cranes, the expansive host,

Which once rose above Hellas.

Where are you going?  Without Helen,

What could Troy mean to you, Achean men?

Both the sea and Homer — all is moved by love.

To whom shall I listen?

Thunderous orator, breaks on my pillow View from the Beach south of Cave Rock (NV)

Spent last week swimming on the Nevada side of Lake Tahoe, about 1/3 mile south of Cave Rock & 4 miles north of State Line & its casinos.  It’s a pretty extreme place: dry & windy, with thin air (6100′) & cold clear water (60 degrees, more or less).  We got good weather for late summer —  80 by mid-afternoon, down to 50 or below in the evenings & early morning.  The old family tradition of swimming before breakfast got bent a little, by pushing breakfast to 10 am so that the sun reached the beach before our plunge.

It’s one of the world’s great swimming holes: Caribbean-blue clear water, and when you’re under in that cold blue everything falls away.  Swimming’s a bit like outer space under any circumstances, but Lake Tahoe feels more moonlike than the moon: the windy chop at the surface vanishes & all of a sudden it’s just you and the still bottom, with huge granite boulders scattered haphazardly like giants’ marbles.

It was wetsuit water, mostly, except a few times in the afternoons when it was too much bother to suit up again.

Rock hopping was the way to go, mostly, moving from one barely submerged boulder to another just poking up its froth-bearded head.  A tricky place for nonwet navigators: we brought a little El Toro, which made a few abrupt stops when the centerboard found a rock before we did. A picture of me at Jones Beach last May, taken at our last seminar by my student Christianne Cain.

A good place for cold-water swimming. 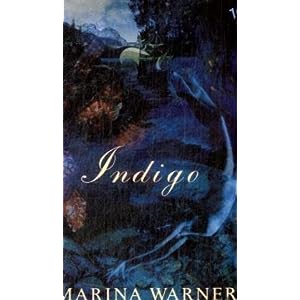 Indigo, or Mapping the Waters

A compelling & poetic re-take on The Tempest in a Caribbean setting by Marina Warner.  A first-contact narrative portraying the origins of the Sycorax-Caliban-Ariel family broken by the arrival of Kit Everard from England in 1609, framed by two different sections about the modern Everards: Ant, the patriarch & master of the Game at Flinders; Kit, his uncertain son; Miranda, Ant’s grand-daughter; and Xanthe, the patriarch’s late-arriving daughter, who displaces both Kit & Miranda from the family succession.  The two girls, Miranda & Xanthe, compete for the role of chosen daughter just as the two cousins in Sacred Hunger struggle to be Ferdinand.

Some nice writing about the sea and Shakespeare: “But for Xanthe Everard this was the final transformation: a pearl of rare size and beauty, she had become incapable of further motion in mind or body; she had given her first and last cry for the love that most people crave all their lifelong days” (376).  Sounds a bit like Garcia-Marquez, I guess.

A very good novel about slavery by way of *The Tempest*.  The main plot concerns the legacy of the merchant William Kemp, who invests in a slave ship in an attempt to save his sagging fortunes.  (His son, who chooses sugar, gets better results.)

But the key tension operates between the son, Erasmus Kemp, and the nephew Matthew Paris.  Kemp wants the good mercantile life; Paris, fleeing from the death of his wife and child while he was imprisoned for publishing heretical (proto-Darwinian) tracts, wants something more radical.

From a Shakespearean point of view, they both want to be Ferdinand: the heir & chosen suitor.  Kemp even plays Ferdinand in a failed production of *The Enchanted Island* opposite a wealthy merchant’s daughter early in the novel.  But it’s Paris’s multi-racial world, on the slave ship, in Africa, and in Florida, that redefine Prospero’s magic isle.