You can also find out more about me on my St. John’s homepage, my Humanities Commons page, and the other pages on this website.

Plus a few favorites —

Gallery Exhibition: Lost at Sea: The Ocean in the English Imagination, 1550-1750 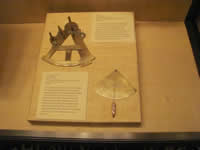 Navigational Instruments on display at the Folger in 2010

An exhibition of rare books and maritime artifacts that I designed and curated for the Folger Shakespeare Library’s public gallery space in the summer of 2010. A collection of essays co-edited with Marty Rojas that features material from the 2009 conference I organized at the John Carter Brown Library in Providence, RI.

A study of the cultural consequences of the first age of globalization among English-speaking writers. Through the phrases “wet globalization,” “blue ecology,” and “shipwreck modernity,” this book unpacks early modern globalization and maritime expansion through the lens of shipwreck.

Essays, illustrations, and poetry about our local urban oceans.

The Age of Thomas Nashe: Texts, Bodies, and Trespasses of Authorship in Early Modern England

Published in late 2013, this collection of essays on the great Elizabethan prose stylist is co-edited with Stephen Guy-Bray and Joan Pong Linton. The only near-contemporary image of Thomas Nashe At the Bottom of Shakespeare’s Ocean

My 2009 book about Shakespeare, the new thalassaology, and “blue cultural studies.”

My 2006 study of prose fiction and the book market in the age of Shakespeare.

A 2004 book of essays on urban culture and criminality that I edited with Craig Dionne of Eastern Michigan University.